Love this! I tried to buy a bumper sticker, but they were sold out.

Along the way, we ran across several Ocotillo plants. They’re indigenous to the American Southwest, and one of my favorites. They’re just so weird–a bunch of stems sticking out of the ground with leaves growing out of the bark. These ocotillos were blooming and they were beautiful. 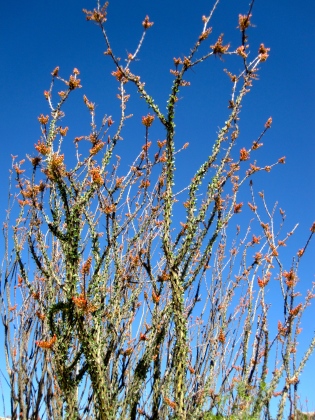 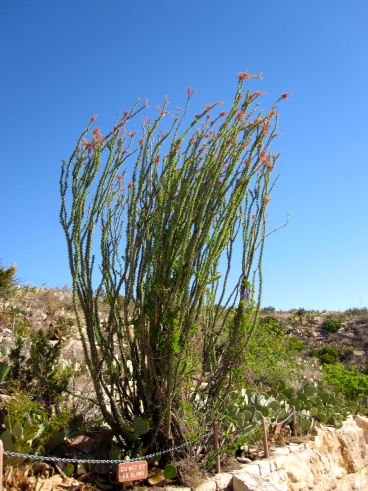 This is the entrance to the cave. The amphitheater in the foreground was built for those who want to watch 100,000 bats leave the cave on summer evenings. Apparently, it’s quite a show. However, during our visit, the bats hadn’t returned from their annual migration to Mexico.

From the amphitheater, there’s a winding path that leads down into the cave. Here’s Bob on that path.

A view of the path from above. It’s steep. It twists and turns quite a ways.  Here and there are plaques to explain what you see along the way. Mostly, it’s barren rock. 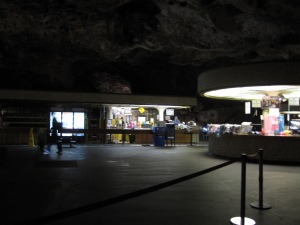 At the bottom, there’s a gift shop and a restaurant. It’s surreal to all of a sudden come upon these things. At times it’s quite noisy here because the pumps have to bring in water and expel all the waste.  Also, there are generators for the electricity. 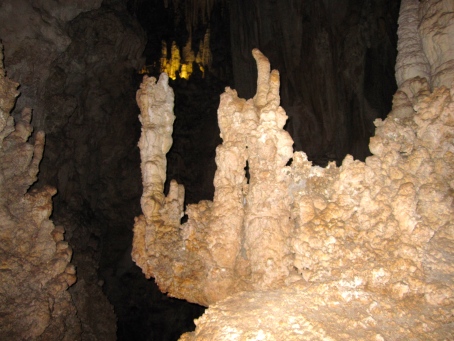 On the tour, we saw many interesting formations. If you come, definitely go for the ranger-led tour. It was fascinating and we saw many things we wouldn’t have otherwise seen.

This formation is called Queens Curtains.

There were lots of blooming cactus in the area.

One thought on “Carlsbad Cavern Photos”

Join 10 other followers
Follow The Shiroffs' Travels on WordPress.com