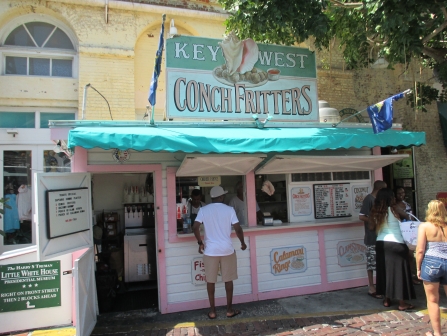 We tried them. They were a lot like hush puppies, only with mildly rubbery little bits in them. Okay, but I won’t rush back for seconds. Also of concern: the unrefrigerated mayo-based tartar sauce. Ewww. 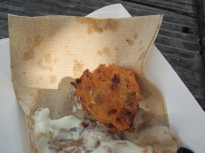 Bob and one of the marginal conch fritters.

There are lots of these little tourist stands all over the city. 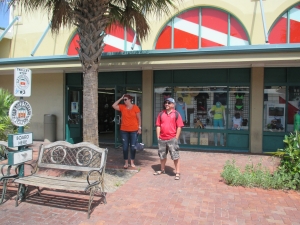 These poor people from Ohio—the trolley driver refused to let them on and explained that on the trolley “we bleed blue.” It was all in good humor (since there were no seats available anyway) and the tourist gave as good as he got. It was pretty funny. 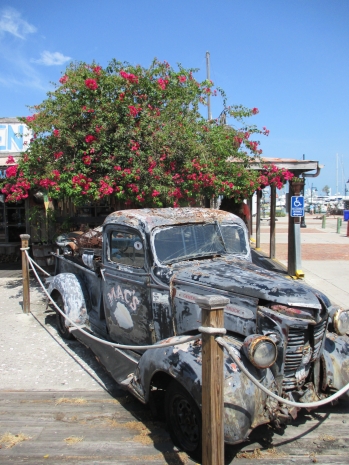 Not sure what the story is here, but it’s covered with bird poop and they’re nesting in the stuff in the back. 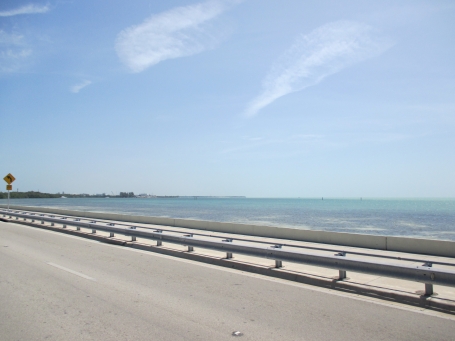 View from the road that circles the island.

This is the most stolen sign in Florida. They finallly just started selling them, and that helped, but it still goes missing regularly. By the way, the other end of US Highway 1 is in Maine, about 2000 miles north.

This statute must be 25 feet tall. It was done by one of the heirs of the Johnson & Johnson fortune and it’s modled off a painting by Renoire.

This is only about ⅓ of this banyan tree. The rest goes over the top of the house and is in the backyard. It’s all one tree. You might think the house is a tree house, but it’s not.

Here are the pics of Truman’s Little White House. It has an interesting history.

Truman’s Little White House. No pics allowed on the inside, but here’s the side of the house. 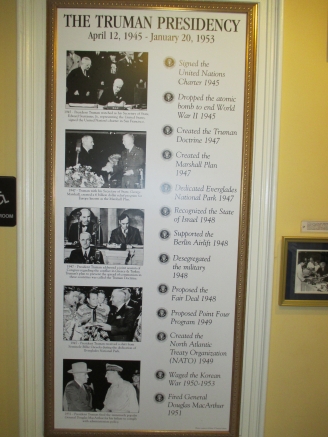 Its easy to forget all the things one man can do when he’s president. Truman was a busy man.

The brick wall in this pick was built by Hemingway himself. He used the bricks from a street that was torn up for repair. No one missed the bricks until they tried to recover the street and found they didn’t have enough. The city sued and Hemingway agreed to pay a penny a brick.

The front of the house. It was built in the mid-1800s, so Hemingway wasn’t its original owner. 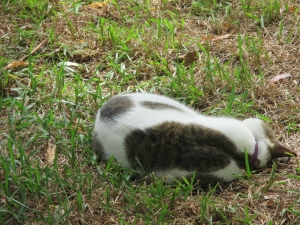 Hemingway had about 50 cats. Currently his house has 45 of them, all descendants of his original cats. They were everywhere! 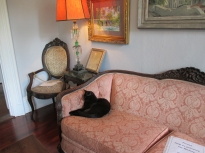 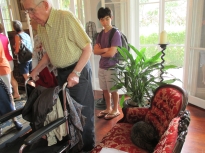 Nothing seemed to bother them very much. There was a sign at the ticket booth forbidding anyone from picking up the cats. 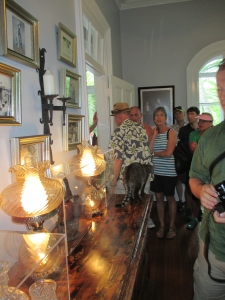 View from the deck that circled the second story of the house. 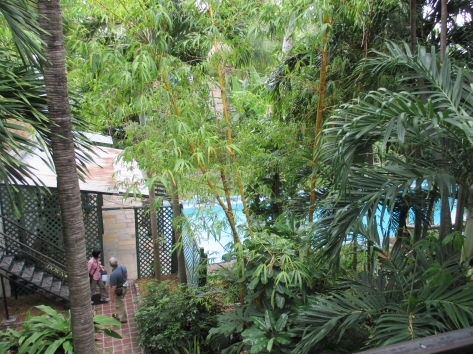 View of the pool from the balcony on the main house. 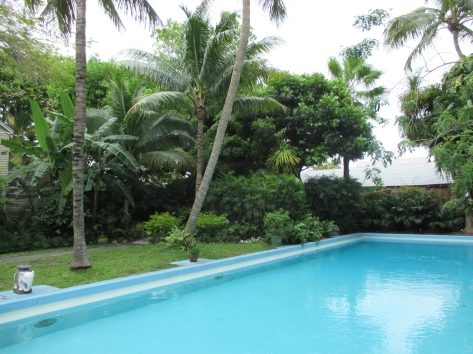 Another view of the pool. Hemingway’s wife had it built while he was away working as a war correspondent (and spending time with his mistress). They bought the house or $8000, but he pool cost over $20,000. It’s 65 feet long!

This is a fountain to provide drinking water for all the cats. Yes, its made out of a urinal. Mrs. H tried to disguise it by putting the Spanish tile on it and installing the larger pitcher, but it’s still a urinal. Some of the cats refuse to drink out of it.

Here’s one of his famous 6-toed cats. Sorry its hard to see. He’s sitting on a chunck of rock that was used to build the house walls. its 18 inches thick so the house has weathered several hurricanes with no problems.

The cats were everywhere! This one was sunning himself in the gutter. This is right at the entrance to Hemingway’s office over the pool house. 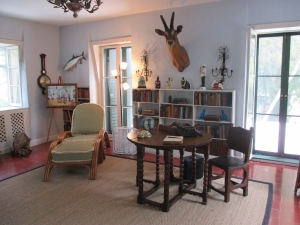 Here’s where Hemingway wrote. He got up at 6 am and worked until about 1 pm most days. He considered it a good day if her wrote between 300 and 700 words a day. He often complained that his brand of typewriter was notorious for misspelled words.

Cat condos. They aren’t locked up here, the cats are free to roam where they want. This is just shelter for those that want it.

Only the special cats get remembered here. There are so many, it wouldn’t be possible to put a marker for all of them here. 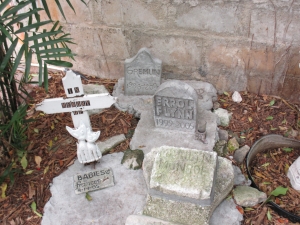 Hemingway named his cats for their personalities: “Friendless” and “Frisky.” Today, they are named after people. 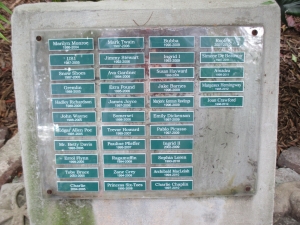 View from the garden. 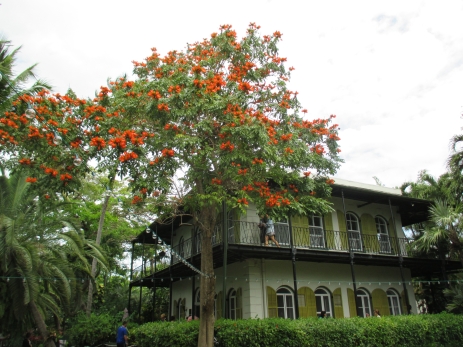 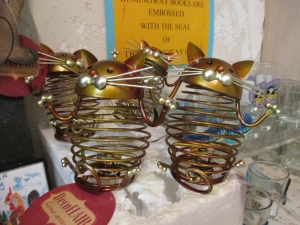 Cute gadgets for sale in the gift shop. 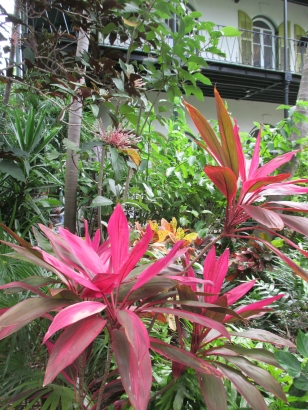 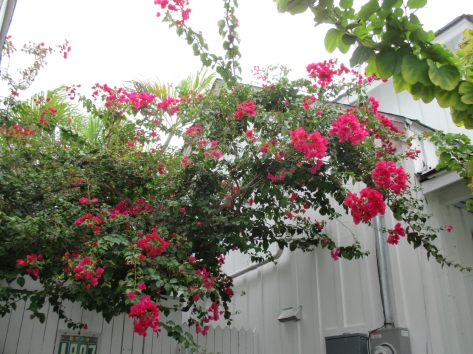 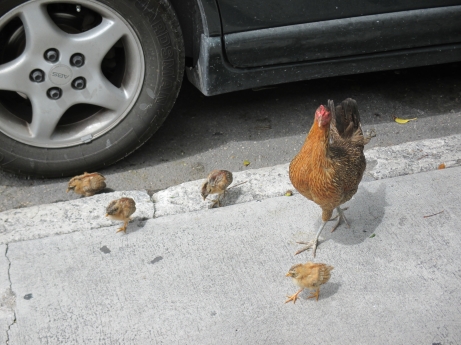 There are wild chickens and roosters everywhere. People brought them from Cuba for cock fighting at the turn of the 20th century. The authorities were looking for new revenue sources and decided to tax all the betting on the fights by taxing chicken ownership. Rather than pay the taxes, the inhabitants released the chickens and they still grow wild. People love them because the chickens eat mosquitos. 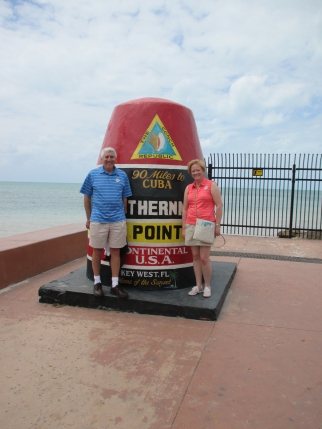 I have no idea what this thing is supposed to be, but it’s south of everything else 🙂

Those who owned the southernmost house were proud of that fact . . . until the next door neighbors built their house several feet more southerly. That house has this plaque by its gate.

Yep, we tried it. I even had a cheeseburger in paradise and it was really good.

We even tried a margarita. Bob said it tasted like medicine, I thought it was okay. I usually love margaritas, but this one wasn’t quite right. I think we drank about ⅓ of it between the two of us.

Key lime pie is big down here. A popular way to eat it is frozen on stick, dipped in chocolate. I haven’t tried it, but I’m not a key lime pie fan. 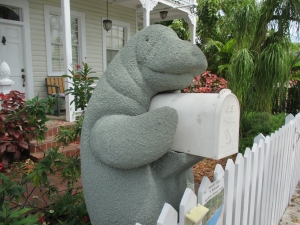 Manatees are like the Florida state animal. They’re everywhere. : ) 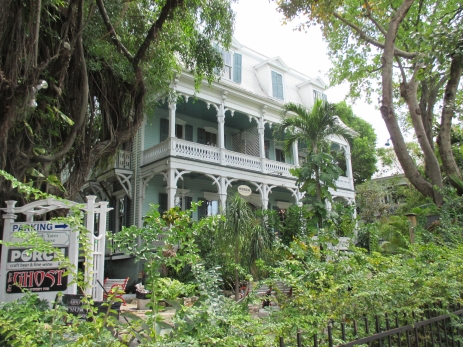 There were many really cool looking houses and buildings on the island. 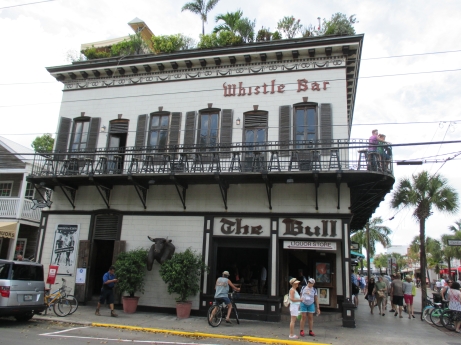 Here’s another. I like the garden on the roof.

Hemingway’s favortie bar. It’s also where the urinal for the kitty drinking fountain came from. 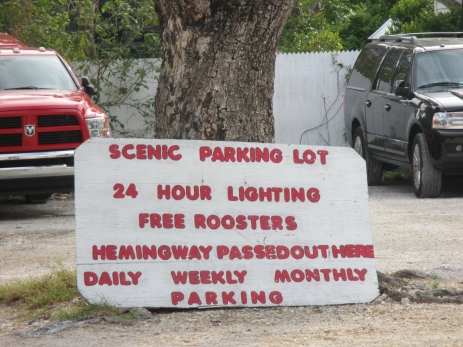