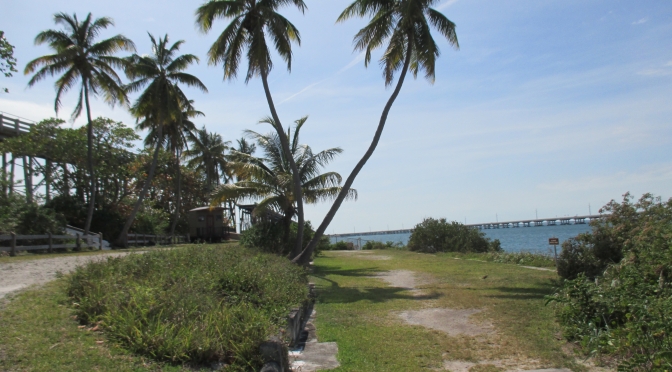 Today we explored the other keys.  We started by driving to mile marker 78 (78 miles from Key West) to Robbie’s Marina where we hoped to get a tour of Indian Key.  No such luck, the winds were too strong and the tours were canceled (It was mid 70s but with sustained 20 mph winds).  I wanted to see Indian Key because it has the ruins of a 19th century town.  It was a thriving place in 1840 when Seminole Indians attacked and killed everyone who didn’t flee.  It’s been deserted ever since.

Instead, we drove to the Seven Mile Bridge and walked along the pedestrian bridge as far as we could go.  I have to say, almost the entire length of the Overseas Highway that is over water, there are abandoned bridges running along right next to it.  Some of the abandoned bridges look fine, in other places they look like they are about to collapse.  I have lots of pictures of this here.
In many places the abandoned bridges are open to foot traffic and people stroll along them or fish.  However, they aren’t open all the way.  Before too long, there will be barricades and the next section of the bridge will be missing.  It’s kind of creepy to see a huge bridge with a section missing right out of the middle.  I have pictures of that, too.

The Oversea Highway also has power lines running along it. I have to say, the power lines are annoying because they get in the way of pictures.  I don’t know how they filmed the movie True Lies without interference from the power lines.
After the bridge, we spent some time on the beach at Bahia State Park.  The beach was long, white, and soft, but it was also full of dried seaweed.  The water was warm and it was shallow (knee deep or less) for 20 or 30 yards from the shore.  It was wonderful for walking and playing.  I really loved it.

Finally, we stopped on Big Pine Key to find the Key Deer that live there.  They are very small—about the size of a 50 pound dog—and they are a subspecies of white tail deer.  We saw two of them and they were little.  The first ran across the road in front of us and its shoulders weren’t even as high as the front of the car.  The second one was maybe 1½ feet at the shoulder.  It was standing under a palm that was only 2 feet high.  I have picture here.

I’m excited about tomorrow.  We’re going to the most inaccessible national park in the United States:  The Dry Tortugas.  Stay tuned!