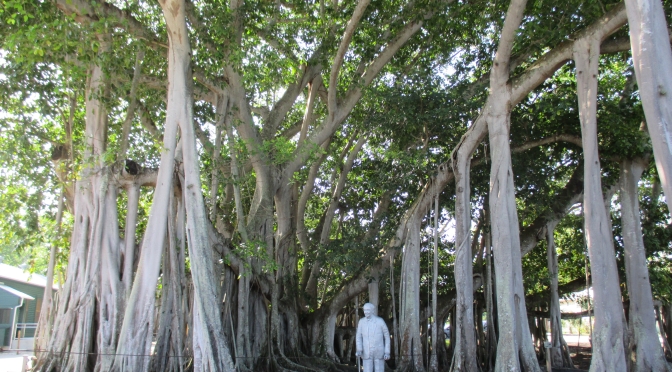 We spent several hours exploring the winter homes of Thomas Edison and Henry Ford.  Did you know they were good friends and next door neighbors?  They often collaborated with their other friend Harvey Firestone (yes, the tires) on projects.  In fact, Edison spent so much time in Florida that he had an entire laboratory there and it was the primary location for all his efforts to develop a domestic source of rubber so the US wouldn’t be dependent on foreign imports.

But, I’m getting ahead of myself.  In 1885, Edison sailed down the river and saw a plant on the banks that he thought would be the answer to his search for a long lasting light bulb filament.  He bought the property that day and had a house built there within the year. It was quite a feat since it was wilderness at the time and everything had to arrive by boat.  There wasn’t even a road.  And it wasn’t just a simple house.  It was two stories with a couple sections and servants quarters and it was surrounded by a wide covered deck.  Then, he had a mirror image of the whole house built right beside the original as a guest house.  It’s very impressive, even by today’s standards.

It turned out Edison was right and the bamboo he saw growing on the banks of the river which did prove to be the perfect filament for his light bulb.  Years later, WWI inspired Edison to find a domestic source of rubber.  If our imports were cut off in another war, the US and its industries would be seriously hampered without a reliable source of rubber.  Of course, this project was very interesting to Ford and Firestone, for obvious reasons.

Toward that end, Edison imported plants from all over the world and planted them on the grounds of his home in Florida.  Many of these still exist and they make the grounds an incredibly beautiful garden.  We really enjoyed walking around because it was so peaceful and colorful.  My favorite was the Banyon Tree that Edison planted in 1927.  It was about 4 feet tall.  Today, the tree is enormous and because of the way it grows, it covers a little more than an acre of ground.  Another favorite is the bougainvillea his wife planted in the 19teens.  It’s now about 30 feet tall.  Pictures of everything are here.

Perhaps the most interesting thing is Edison’s forward thinking.  He wanted to develop a battery operated car (way ahead of his time!) and he was concerned about humanity using up its oil resources.  He thought our future was in the power of the sun.

After lunch, we drove to Orlando.  We wanted to do something interesting for dinner, so we walked over to City Walk, which is sort of the Universal Studios equivalent of Downtown Disney.  We ended up with ice-cream instead of dinner, but what are vacations for?

We also ended up at the Wizarding World of Harry Potter.  What a kick!  It’s an incredible place, I just wish it was bigger and there was more to explore.  We decided to try the main ride, which is a trip through Hogwarts.  We saw classrooms, the Great Hall, Dumbledore’s Study, the Room of Requirements, the sorting hat, the house points tally machines (I forget what they’re called), the greenhouses, and even the talking paintings, including the Fat Lady.  There was even an interesting discussion between the portraits of the four founders about letting in muggle-born students.  It’s all very well done.  The ride itself was fabulous and lots of fun.  Hermione casts a spell so you can fly and then you fly everywhere.  It was very well done.  More on all this tomorow!