Everything was getting green. I really hate my new camera because it doesn’t capture how deeply green the green plants are. 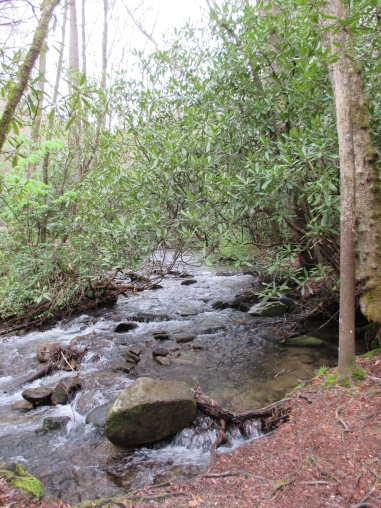 Here’s where the stream is diverted into a flume. 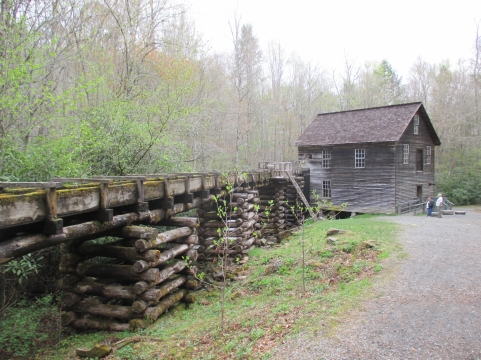 Here’s the flume leading to the mill. This is a grist mill. Grits were, and still are, a staple food in these parts.

I think the blooming trees are dogwoods, but not completely sure.

Yes, our Bob was here, but he was a good boy, unlike the previous Bob.

Here was are in the Smokies!

A view of Gatlinberg, Tennessee, from our hotel room. You can see a little of the water vapor hanging in the air that gives the Smokies their name. 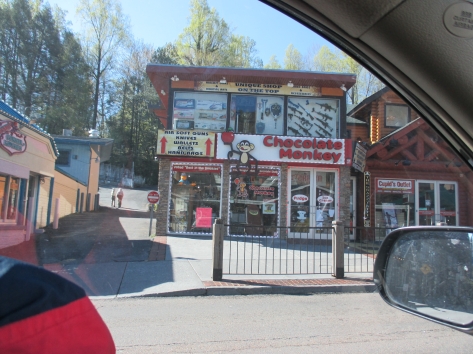 A little chocolate monkey topped with really big guns? Sure, I’ll have one of those. ??? 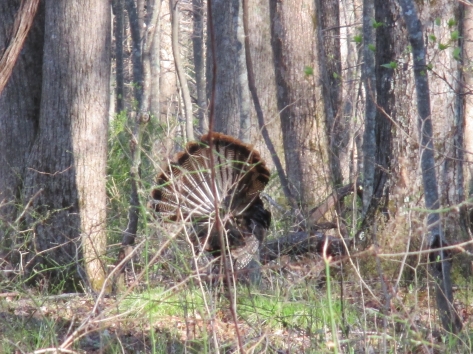 We saw turkeys everywhere. There were three in this group and they were very vocal. Here you can see two of the three. Lots of beautiful streams are everywhere.

So much potential! I wish I could go back in a month when the other trees have leaves.

Here we are in a higher elevation becuase Spring has barely started.

Did I mention I hate my camera? This area was vividly green, so green it almost hurt. It was really beautiful.

Here’s a little more of the green, but it was eye-popping. 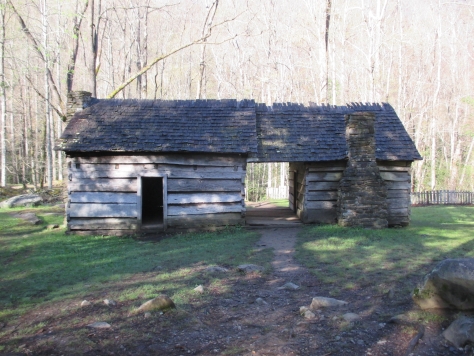 This is the steam behind the cabin. 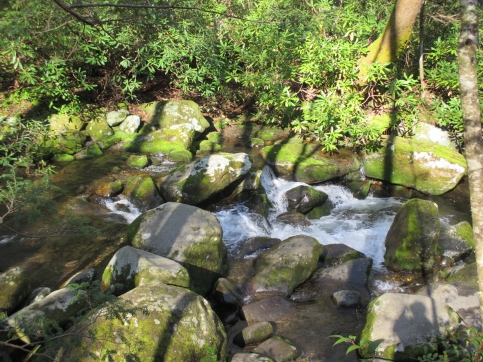 Here’s a little more of the green.

I’d love to come back to the Smoky Mountains. I see the appeal of this place. The beauty here really grows on you. However, this national park is the most visited in the country—even more than Yellowstone. Even this early in the year, it was pretty crowded and traffic was slow. 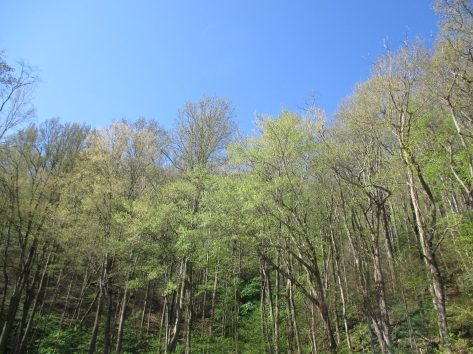 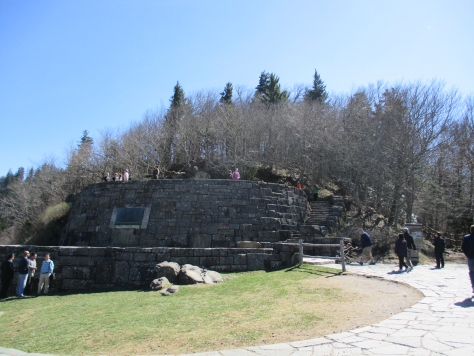 The park was established with the help of the Rockefellers. Here’s a memorial honoring that fact. We also have the Rockefellers to thank for the fact there is no entrance fee into the Smoky Mountain NP, it was a stipulation of their donation. 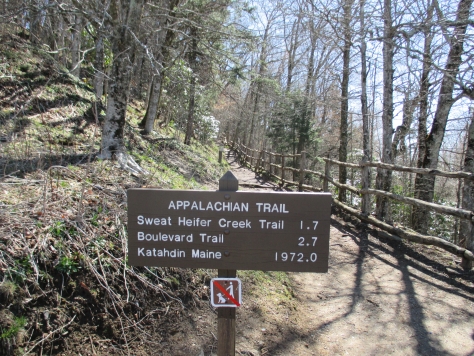 The Appalacian Trail! I’ve always been curious about this trail. I have to say, it was pretty treacherous.

The first little bit from the parking lot had a guard rail, but it didn’t go far and the drop off was pretty steep. 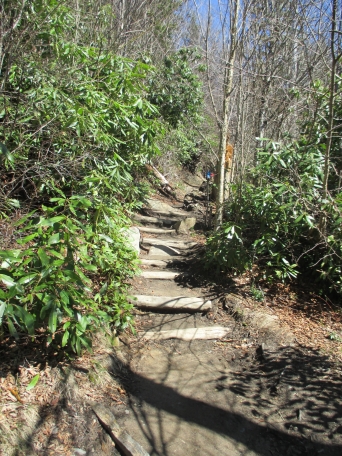 And the footing was anything but sure. You had to really watch it. Also, the dirt was pretty wet and everything was slippery. Here’s Bob on the Appalachian Trail! He was a good sport because this was on my bucket list and he was humoring me. Otherwise, he probably would have skipped it. Especially since the part we were on was steeply uphill. : ) 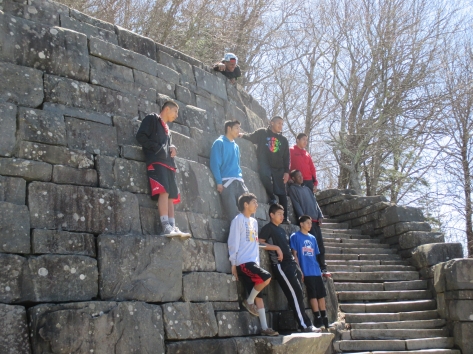 Here we are at the Appalachian Trail. Here, the trail follows the NC/TN border.

Next up was Clingmans Dome and here we learned the meaning of steep incline. It was brutal! 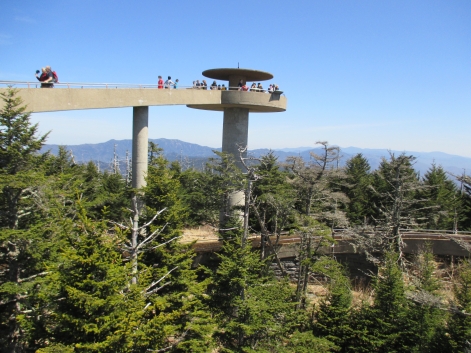 But the top had this nifty tower. 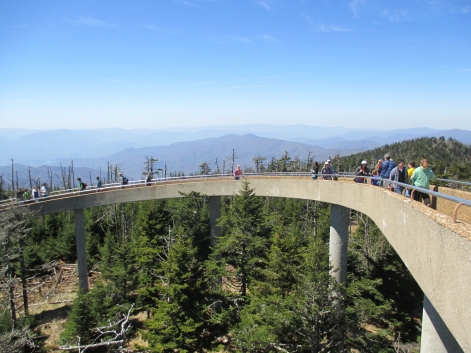 On the ramp to the top of the tower. 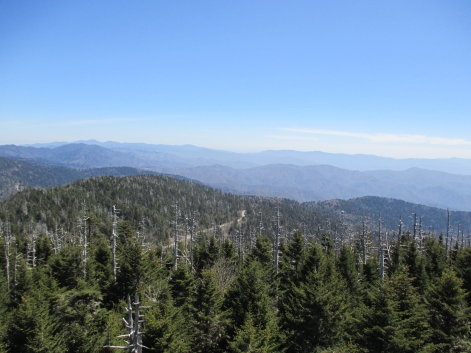 The view from the top of the tower. 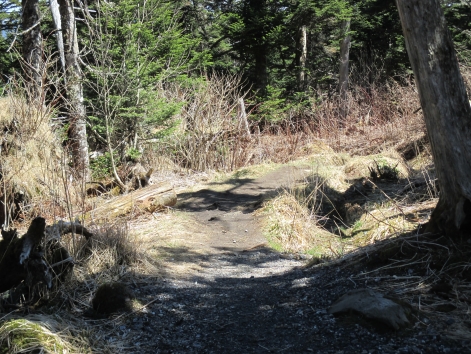 The Appalachian Trail passes by Clingmans Dome, too. Did I mention there were lots of really serious hikers around? They were intense.

A close up of a bend in the Appalachian Trail. I’m telling you, it can be treacherous! Most of those serious hikers I told you about had two things in common: two walking poles and a folded egg crate to cushion the ground when they slept.

Another view from Clingmans Dome.