Yikes, I’m a little behind.  I blame it on the wine.  By the time I’ve had a glass, I’m not much up for sorting photos and writing a blog.  So, sorry for the delay!

On Sept. 24th, we went to Capri for the day.  We caught a taxi to the port . . . and it finally happened; we were in a car accident.  It was supper minor, the two cars just scraped their rear ends together as they passed, but it sure ticked off the cab driver! It happened in a spot where the road (only about 10 feet wide) made a hairpin turn — and I mean a sharp U.  Even little cars, if they don’t approach just right, will have to back up to properly complete the turn. Did I also mention the road is two-way and only one car can pass through the bend at a time?  In our case, the taxi passed through the U but the oncoming car didn’t wait for us to clear and he wedged himself into the U and started to turn which made the back bumpers of the two cars scrape together.  Given crazy Italian traffic, I’m surprised it hasn’t happened sooner.

Anyway, our trip to Capri was a little shaky because it was pouring rain.  It wasn’t a big deal on the boat, but it was a different story on the bus we boarded to take us from the port to Anacapri.  Unfortunately, the bus had many holes — the skylights, the windows, the door, everything leaked.  It was bad that our tour guide, who was standing in the stairwell by the door, had water up to his ankles!  By the time we got to Anacapri, no one was dry.  Another thing, the busses are designed to move as many people as possible as quickly as possible.  They literally have 7 inches between the seats.  Everyone had to sit with their knees slanted into the minuscule aisle, or up by their ears.  I’m not even sure children would fit well on that bus. It’s a good thing we were with a cheery group!  Luckily, by the time we were ready to explore Anacapri the rain stopped and the rest of the day was sunny and beautiful.

When I think of Capri, I think “beautiful island” and “shopping.”  Well, both are true.  However, the shopping wasn’t very interesting because most of the shops are also common in the States.  I checked a couple of places and found the prices weren’t very different, either.  So, we stuck to wandering around and enjoying the views.  We definitely can’t get those at home!

While doing this, we met some really interesting people.  Actually, we’ve met many people on this trip so far.  Most have been from London or Boston — probably because Bob wears his BU hat everywhere so people stop him on the street to ask if he’s from Boston.  The Capri trip was no different.  For some reason, it is often the case that the people we meet have kids around Abby’s age.  I’ve really enjoyed hearing people from all over talk about their everyday lives and finding they are absolutely no different than our experiences in the US.  People are people no matter their religion or nationality. Of course, I knew this, but it is an absolute delight to see the evidence first hand. My favorite example is the couple we met from Glasgow.  They left their 16 year old son home for the weekend and they were absolutely gleeful about the fact they arranged for grandma to stay with him, sort of against his will.  They had lots of stories of wild parties and stupid teenage behavior, all to familiar to parents the world over.

So, back to Capri.  It’s a small island with rugged shorelines, amazingly blue waters, a couple of old towns (Anacapri and Capri Town), and lots of history.  It’s not easy to get around; the roads are very narrow and they climb steeply up the craggy slopes of the island.  You can walk around quite a bit of it, but that involves literally hundreds of stairs, so wear comfortable shoes!

Here are some pictures to help you imagine.  : )

Okay, I’m starting with breakfast.  Have I told you about the breakfasts we’ve had on this trip so far?  All of our hotels have breakfast included and the one in Sorrento was exceptional.  It started with fresh-squeezed orange juice (sometimes complete with a seed or two), then fruit, a small Caprese salad, and a selection of cheeses and smoked/cured meets.  After that is a frittata or omelet of the day and a beautiful selection of pastries.  We had to leave early for the trip to Capri so we only had 10 minutes to eat. I grabbed the pastries and brought them with us to enjoy in leisure.  They were still warm and absolutely divine. 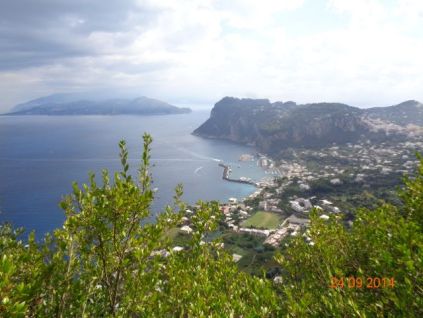 Finally, a view of Capri from Anacapri.  The land in the distance is the Sorrento peninsula, with Sorrento on the left side and the beginning of the Amalfi Coast on the right.

Some views of what the cities are like.  Like the Amalfi Coast, they are built on a steep hillside, so stairs and steeply sloping walkways are the best way to get around.  It was also very crowded in places.

At first, I thought this might be a new-fangled Italian fashion (some of them are really weird!) but then I realized it was an art gallery.  : ) 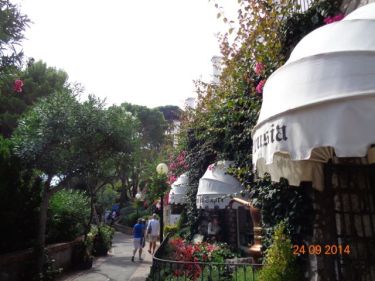 We found lots of beautiful spots walking around the shopping districts. 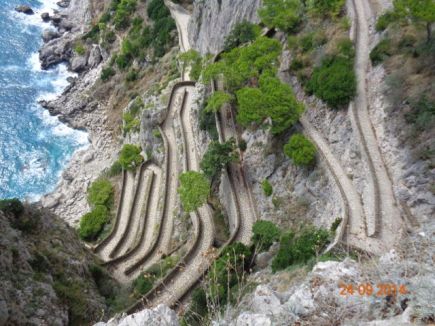 These photos were taken from the Gardens of Caesar Augustus.  The shoreline was breathtaking, but the path leading to the next little village along the coast was also spectacular.  The village is just around the first cliff and tucked into the cove. In these pictures, you  can see how the curve in the road in the first picture is the same as the one in the second picture. Together, they fit together to give you a picture of the whole coastline. 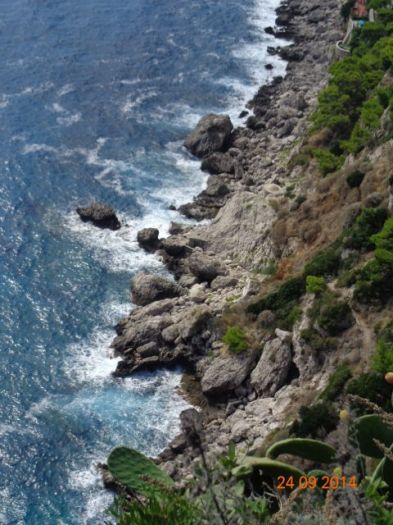 This is more of the same shoreline as the pictures above, but it shows more detail.  If you look closely, you will see a little hut, a stairway hewed out of the rocks, and the roof of a small round structure.  Can you see the two structures and the stairs in the first picture?  If not, I zoomed in for you.

Another view from Caesar’s Garden. Once the rain stopped, it was a beautiful day! 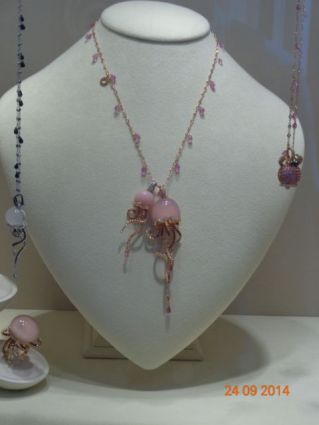 I got a kick out of this necklace. I also love jellyfish, so it was tempting. : )

This is an ad on the back of the bus, but these watches, known as Capri watches, were everywhere in the stores.  They’re kind of whimsical.

Another view of the marketplace. Just lovely. 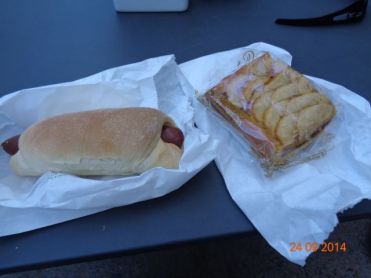