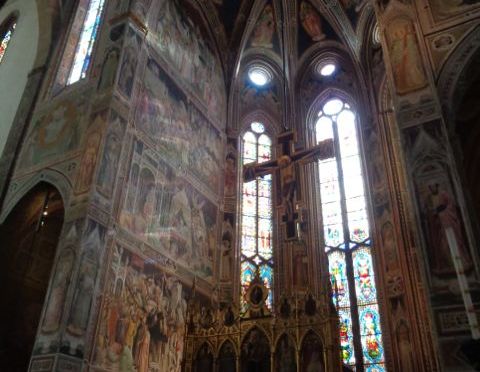 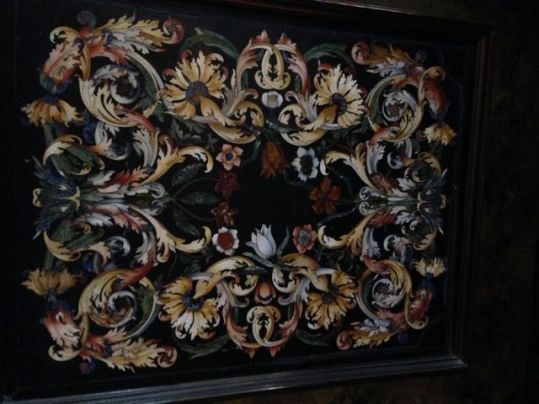 Wow, what a day!  Today we spent the morning with Michelangelo, Dante, Machiavelli, and Galileo, just to name a few.  Really, truly.  We found all their tombs inside Santa Croce, another incredibly beautiful church in Florence.

After a break for lunch we also explored the Medici Chapels which were covered entirely in semi-precious materials such as jade, quartz, lapis, etc.  The workmanship was spectacular.  As always, pictures are the way to go! 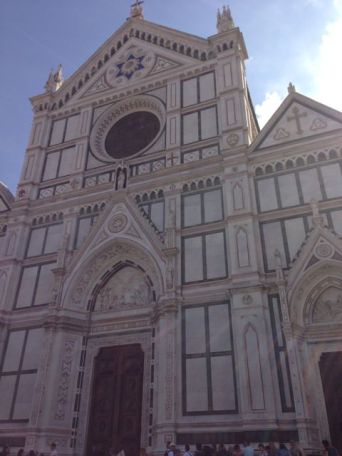 Here’s the outside of Santa Croce.  It’s very similar to the Duomo, but not quite as elaborate.  However, unlike the Duomo, this church is breathtaking on the inside 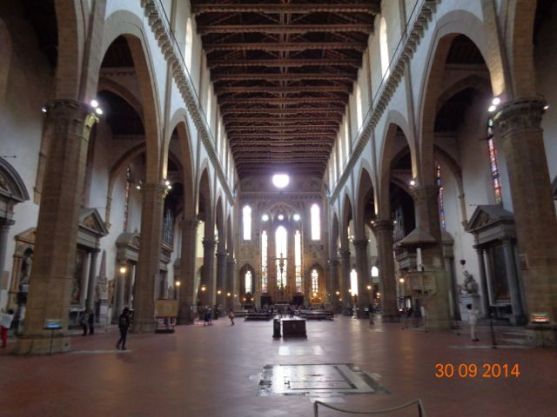 This is a view from the back.  It’s quite large and contains many important works of art.  But the thing that impressed me the most is the fact it was literally paved with grave markers.  The entire church is an enormous graveyard.

When we were on the Amalfi Coast, we learned that Italians bury their dead within 24 hours and they don’t embalm them.  A couple years later, the body is exhumed and the bones are put in the family vault where generations of the same family can be found.  I think this church is the final resting place of the bones. 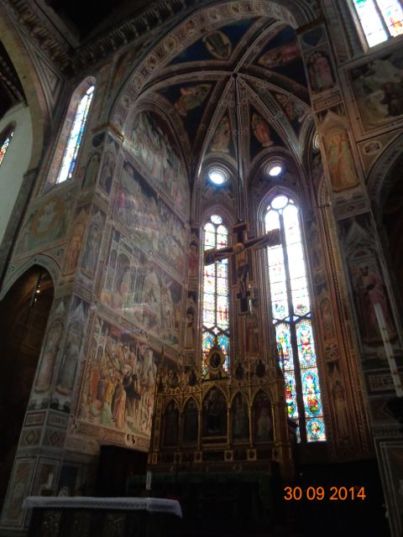 Here’s the main altar.  It was hard to get a good picture because the sun was shining brightly through the stained glass. 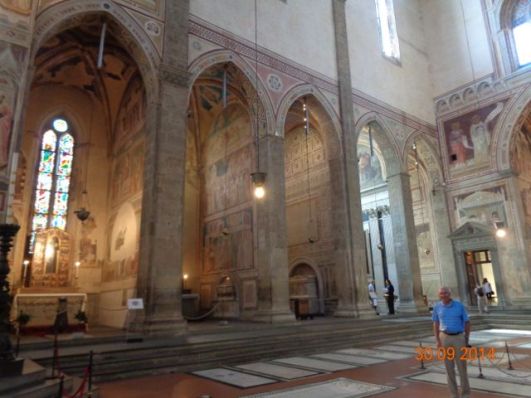 Just to the side of the altar were 10 alcoves, 5 on each side.  Each one was completely different.  You can see Bob here, surrounded by grave markers. 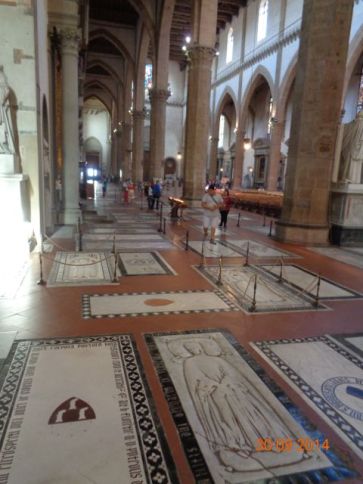 More of the grave markers. 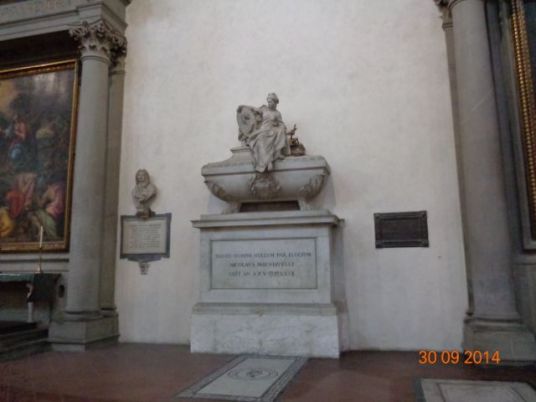 And here we have Machiavelli’s final resting place. 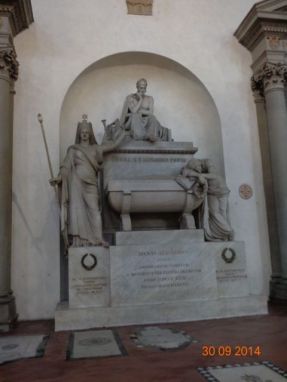 And here’s Dante — the man who wrote the Divine Comedy. 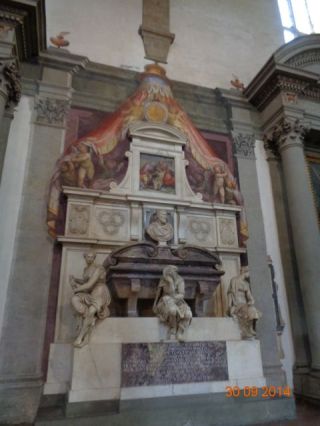 And here’s Michelangelo.  He lived to be 89 years old, an unheard of age at the time he lived.  He died in Rome and wanted to be buried there, but his body was stolen in the night by several Florentines and he was buried here before anyone in Rome (namely, the Pope) could object. 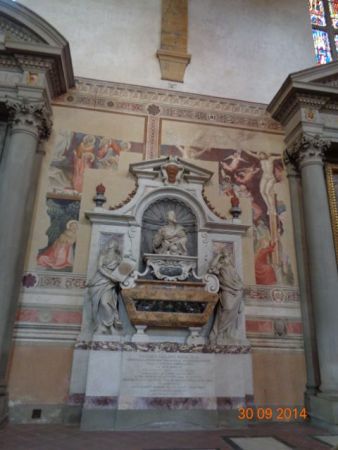 This is Galileo Galilei.  I was surprised to find him here because I thought he was excommunicated for his scientific findings. 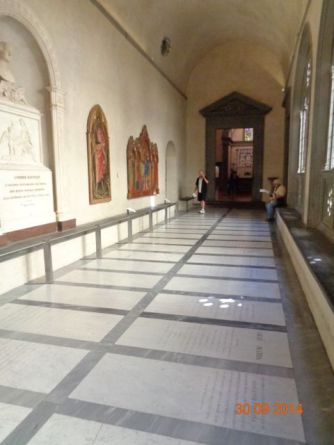 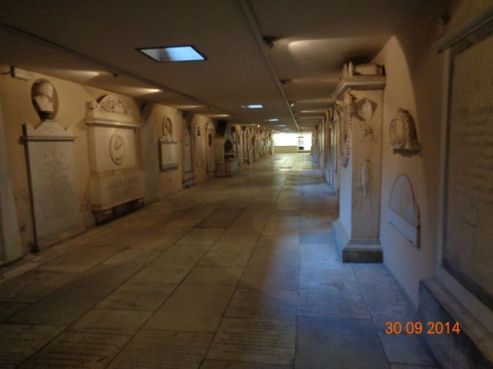 More of the grave markers.  They were literally everywhere. Take a look at the floors. Every tile is marked with who’s lying beneath. 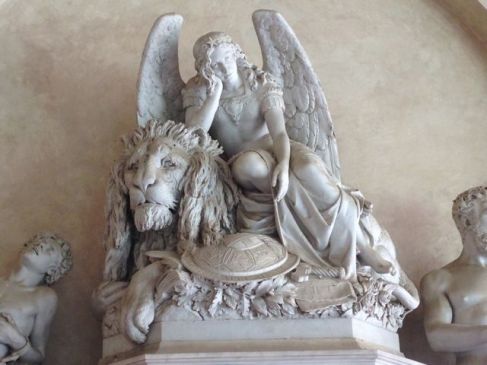 I just liked this poor bored angel.  Although, her long-suffering lion also deserves some sympathy.

Next on our tour was the Pitti Palace, lunch, and San Lorenzos.  But the real show stopper was the Medici Chapels.  They were built in honor of the first several Medici’s who ruled Florence back in the day.  It was also meant to be the place where all the Medici’s would be buried.  To build the chapels, the Medici family sponsored a new kind of art.  They knew frescoes and paintings would eventually fade, so they had the entire inside of the chapels, including all the “paintings” made out of precious and semi-precious stone.  It was stunning. And HUGE!  The main chapel is absolutely enormous. 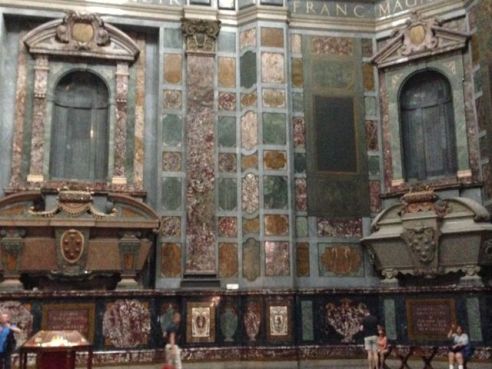 Here you can see the scale of this chapel compared to the people on the ground.  Enormous doesn’t begin to describe it.  Above what you can see here is another section of wall just as big, then there’s a beautifully done dome.  Everything you see is covered in perfectly fitting stone. 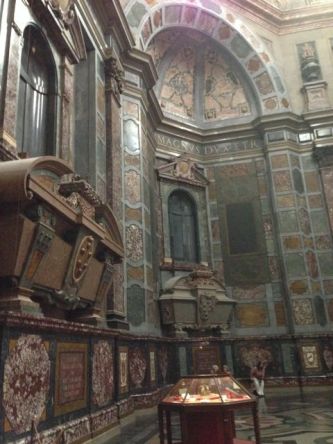 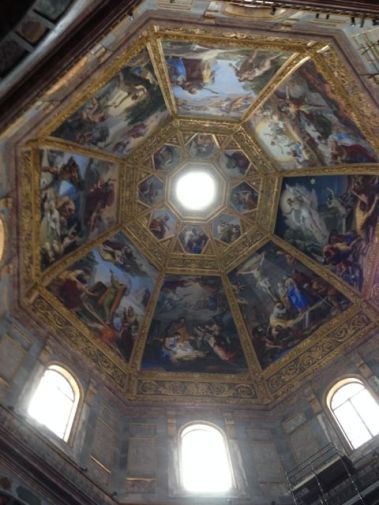 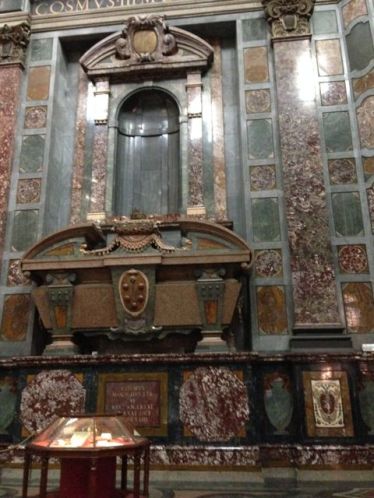 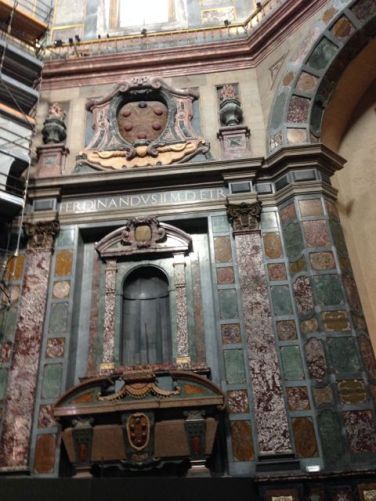 It was impossible to get a photo to do this room justice.  Also, half of it was covered by scaffolding because of restoration work.  Apparently, all that precious stone is held in place with nails and a large panel fell out of the ceiling in 1999.  Since then, renovations have been on-going.

Just in case it wasn’t clear before, the big tomb-like things are . . . tombs.  They hold the first two or three Medici’s that ruled Florence.  They were the good rulers.  The next several (the ones who built this chapel) were real tyrants and hated by the people.  Luckily, they got better after that.  : ) 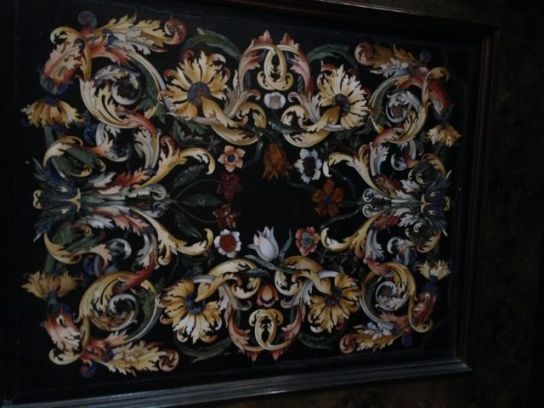 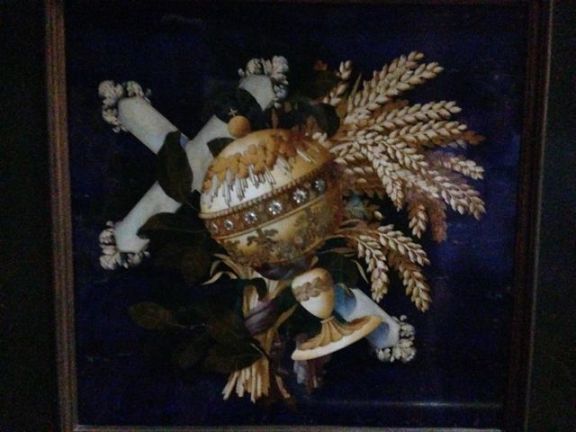 Each of these is close to 2 feet on its long side.  So they aren’t very big, but the colors and detail are stunning. They are made entire out of precisely cut gem stones. There is no grout, they stones fit perfectly together. 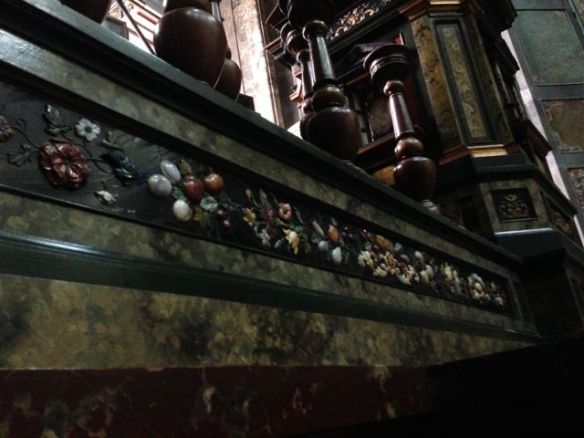 Here’s some close ups of the details.  Every color is a different precious or semi-precious stone that’s been cut to fit precisely with the stones around it.  If you ran your hand over the pattern, it is completely smooth. (Except for the last picture where the stones were purposely three dimensional.)  The workmanship is exquisite.  The benefit is the ornamentation will never fade and the chapel will never lose its splendor.

We saw so many other awesome things today, including more at Santa Croce and the Medici Chapels, but it’s just too much to share.  Plan a trip to Florence!  I’m sure you won’t regret it.

One thought on “Santa Croce and the Medici Chapels”

Join 10 other followers
Follow The Shiroffs' Travels on WordPress.com