I went to college in Omaha, Nebraska, where I discovered one on my life-long obsessions–Napolean Torte. It’s not much to look at. As desserts go, it’s pretty humble. Don’t let the visual throw you. It’s 20+ layers of pastry, butter, and apricot goodness. Those who’ve tried it know–this is the best dessert you’ll ever have. I promise.

If you’re curious to try one, you can order one from the Lithuanian Bakery. If you live anywhere near Omaha, make it a point to stop in and pick one up. If you don’t, it’s worth the money to buy one (or two, or three . . . ) and have it shipped. The tortes can be frozen and I’ve never had one spoil in the freezer, even after months and months.

However, if you want the experience of making your own, it’s a great holiday tradition that is best done with help.

First, you have to prepare the dough, then roll it into about 20 tortilla-sized rounds that are baked individually. Once done, they look look like large crackers. 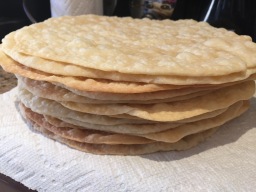 Next, you’ll need to make the filling. I can’t decide if it’s more pastry cream or pudding, but its fabulously rich and decadent. 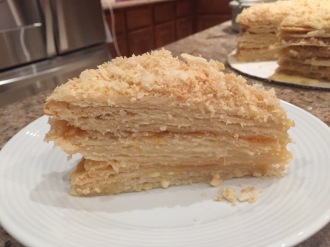 As I said, it’s not pretty, but it is the most decadent thing you’ll ever try. It’s the basis for my firmly held belief that the uglier the dessert, the better it tastes. The pretty, fancy ones are so often disappointing.

Anyway, if you’re interested in making your own torte, the recipe is here. I believe this recipe is close to the one used by the Lithuanian Bakery because it was first published in The Melting Pot, an ethnic cookbook that solicited recipes from different ethnic communities in Omaha.

I made 4 batches of the dough and 2 batches of the cream and ended up with 5 tortes. I did it all in one day, but it about killed me. The good news is we’ll have tort for months and plenty to give as gifts, as well. Enjoy!