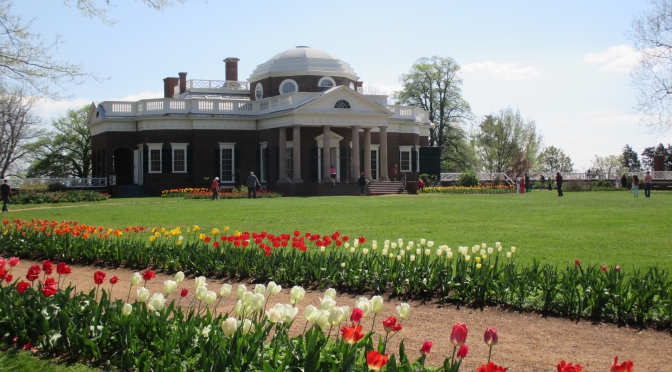 Okay, the Blue Ridge Parkway was kind of a bust.  We tried to drive its entire length, but we ran into a detour that took us off the road for about 50 miles.  Then, when we got back on, we realized Spring really hadn’t sprung, yet.  There were very few budding trees and everything was gray and wintery.  Also, none of the visitor centers were open — so no bathrooms.  They were kind enough to leave Port-A-Potties in the parking lots, but beyond disgusting doesn’t even begin to describe them.  So after a morning of frustration, we just plugged our next destination into the Magellen.  After hours of driving, we were only 15 minutes closer to that destination than we were that morning at the hotel!  Ugh!

That destination was Charlottesville, Virginia, where Thomas Jefferson’s home is.  It’s called Monticello.  You’ve all seen that home:  its on the back of every nickel.  Take a look at the pictures and see for yourself.  They’re here.

I learned some very interesting things.  First, about the house.  I always saw pictures of the house, like what you see on the nickel, and assumed that was the entire house.  Not so.  The majority of the house is actually in the basement.  The construction was ingenious (no surprise, Jefferson designed it himself).  The main part of the house that we’ve all seen is where Jefferson lived and conducted his work.  Inside are bedrooms, a receiving room, a parlor and a dining room.  The rest of the necessary rooms to run a house are one floor below under long walkways that extend out of the sides of the house and then make right hand turns and extend even further from the back of the house.  These “basement” rooms include the kitchen, a smokehouse, the ice house, several privies, slave quarters, storage rooms, and more.  All the areas are well lighted, well ventilated, and they stay nice and cool. The roofs are covered by earth, but the land drops away so the sides of the rooms are completely open.  See the pictures, it was very interesting.

The second thing I learned blew my mind.  Maybe I’m naive, but I just never thought about it.  You’ve probably heard that after Jefferson’s wife died in 1782, he had a slave mistress for 4 decades with whom he had 6 children (4 lived to be adults).  After lots of scholarly debate and some DNA evidence, it is largely accepted that this is all true.  What I didn’t know is the woman in question was 3/4 European ancestry and was reported to be exceptionally beautiful, white, and she had long, straight hair.  What’s more, she was a half sister to Jefferson’s beloved wife.  That means the children she had with Jefferson were ⅞ Eurpean. In fact, when the children came of age (about 1810 to 1825), Jefferson allowed them to leave the plantation and 3 of the 4 passed into white society, married and carried on with their lives.  The fourth one identified himself as mulatto and married a mixed race woman.  His family continued to intermarry through the generations and his is the only branch of the family that is of color.  One of the other sons formerly changed his name to Jefferson and he and his son spent years of their lives working in their state legislatures (Ohio and California), and it was known that they were the son/grandson of Thomas Jefferson.

I found this whole dynamic fascinating.  What’s more, the children apparently looked just like Jefferson.  On several occasions, guests at dinner looked from the servant to Jefferson and obviously realized the connection.  One minister who was a guest at Monticello wrote in his diary his disapproval of Jefferson holding his own children in slavery.

Apparently the lives of all the slaves at Monticello were pretty good.  Jefferson’s own children were allowed to stay in the house and were assigned light household duties when they were children.  When they became teenagers, they were assigned to their mother’s brother (also a slave) who was a master carpenter, so they learned a trade that they could use to support themselves outside the institution of slavery.  His daughter became a weaver.

When Jefferson died, his two youngest children were teenagers and hadn’t been freed yet.  Jefferson’s will freed them, as well as their mother’s brothers. It didn’t free Sally, their mother.  However, Jefferson’s daughter (the only surviving child that he had with his wife) allowed Sally to leave with her sons and she lived as a free white woman for the remaining 10 years of her life.

The question I had is what was the nature of Jefferson’s relationship with Sally?  Did he love her?  The general thinking is that yes, he did.  Their affair began when Sally traveled to Paris with Jefferson’s daughter as a lady’s maid. Sally and the daughter stayed for a time with Abigail Adams and her husband in England. During that time, Abigail wrote to Jefferson stating the maid who had accompanied his daughter was a handful. I forget the words she used, but the gist was Sally was a hot little number and looking for trouble. She’d need a lot of supervision to keep her out of trouble.

I’m guessing Jefferson wasn’t immune to her charms. 🙂  When Sally entered France, she became a free woman under French law. She could have stayed, it was her choice.  Instead, Jefferson begged her to return to the US with him and he promised to treat her well.  He also promised to free all her children when they came of age.  She agreed and he kept his promises because Sally had an easy life working in his home at light chores.