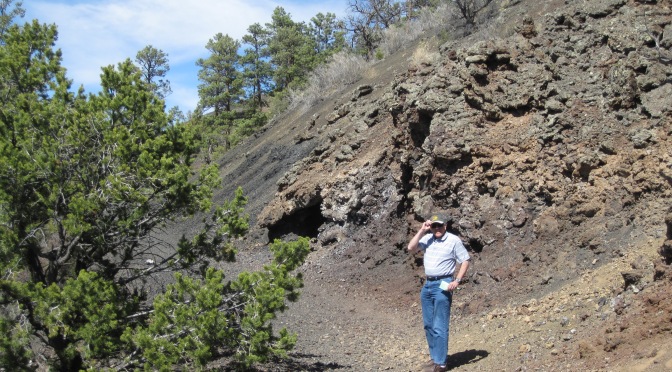 What a fun place to visit! It’s an area owned by the same family for several generations and they are battling with the National Park Service for control of the site. I can see why the Park Service wants it, it is a treasure.

The first thing we noticed when we drove into the parking lot was the dead dog stretched out in the middle of the parking lot. It was a shocking and upsetting thing to see. It was also weird because ours was the only car in the lot. We weren’t sure if the site was open or if there was something wrong. With the dog, we wondered if this was the beginning of a horror movie.

Bob swerved so he wouldn’t hit the dog and it raised its head and yawned at us. What a relief! No horror movie–just a supremely lazy dog.  After we parked, I approached the dog carefully to see if it was ok. When I was about 10 feet away, she rolled onto her back and presented her belly for a good scratch.  As soon as I started scratching, she sighed deeply, flopped her head back down and didn’t move again.  She was a riot!  Apparently she is the owners pet and she takes it upon herself to patrol the grounds at night and keep all wildlife away.  During the day, she is comatose.

Anyway, after a chat with the owners, we learned about their battle with the National Park Service. The land has been in their family for generations. They’ve always operated it as a tourist attraction. Now they’re struggling to keep it in the face of much pressure from the National Park Service which wants to take over the operation. We also discovered we were a little early in the season for tourists. We had the place to ourselves!

We headed up the path to the Bandera Volcano. The whole area was covered in rough volcanic rock and the path was black from crushed lava rock.  The trail circled up the outside of the volcano until it reached the side where the the cone had collapsed and the lava flowed out.  It was a very windy day and the path was steep–probably the most strenuous thing we’ve done on this trip so far–but it was worth seeing. I’ve never been inside a volcano before. It was black and barren. Hardly anything grew inside. Eerie and other worldly.

After lots of pictures (and a mad dash by Bob to retrieve my new Solar Observatory hat when the wind blew it off), we returned to the little store and began the journey down the other path to the ice cave. Even in the middle of a burning New Mexico summer, the 20 foot thick ice sheet in this cave never melts. The cave is actually a collapsed lave tube where water naturally collected. Because of the prevailing winds, the shape of the cave, and the insulating properties of the lava, the cave never gets above 31 degrees, no matter how hot it is only 20 feet away.  We had to walk down an old wooden staircase to see the ice cave and that was an adventure in itself.  Of course, my healing calves weren’t happy, but what’s a vacation without sore legs?

You can see all our pictures here.