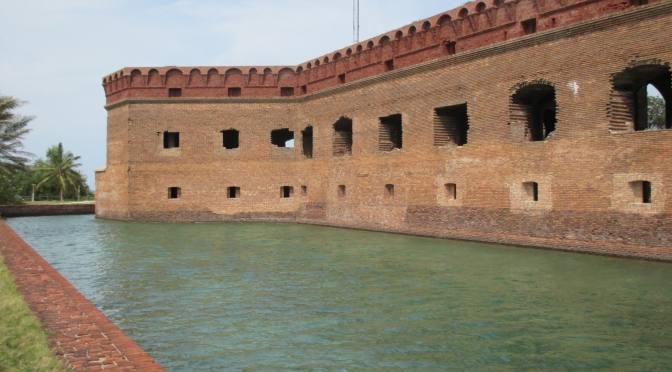 Today was a bucket list day for me.  I’ve always wanted to see Fort Jefferson on Garden Key in the Dry Tortugas, and today was the day.  It’s really an amazing place.  To get there, we had to take a boat about 70 miles due west of Key West.  There sits Fort Jefferson. It looks like it is just rising out of the ocean. It is the largest structure built from brick anywhere in the world.  It took 16 million bricks and it was never completed.

Fort Jefferson is a five-sided, two story structure that was made to hold over 400 guns (cannon sized) and 2,000 men.  It was one of the first major undertakings of the Army Corp of Engineers and certainly the first project they built at sea. Construction began in 1846 and went on for 30 years, until the fort was abandoned in 1874.

It all began right after the Louisiana Purchase which doubled the size of the US in one fell swoop.  It also gave us the very valuable port of New Orleans and use of the entire Mississippi River as a means of moving goods.  That was worth protecting.  The location of the fort allowed the US to control access to the Gulf of Mexico, thus protecting our trade routes.  Also, the island is the only safe harbor for 70 miles.  It has a natural deep water channel that’s perfect for anchoring a boat and that channel is surrounded by shallower areas.  In a storm, a boat anchored in the harbor is protected from most of the pounding waves by the surrounding shallow areas.  Even today, when a hurricane approaches, the channel fills with all kinds of boats from all over the Gulf because of this protection.  In the 1800’s the fort could deny anchorage to an enemy vessel and leave it to the mercy of an approaching storm.

While the fort could, in theory, train 125 guns on any target, no matter the angle of approach, and it could fire a shot 3 miles, it never saw a battle.  The closest it came to was in 1861 when Florida seceded from the union.  One fishing boat sailed up and demanded the fort (which was a Union post) surrender.  The commander allowed the ship to sail away unharmed to spread the word that the fort was under Union control.  It was all a bluff because most of the guns hadn’t been delivered yet and the fort was nearly harmless.

The fort is most famous as the prison of Dr. Samuel Mudd, a convicted co-conspirator in Lincoln’s assassination.  He’s the guy they’re referring to whenever someone says “his name is Mudd.”  Anyway, he was imprisoned at the fort for 4 years when a yellow fever epidemic hit and killed every single member of the medical staff.  Dr. Mudd volunteered to help and he did such careful research and kept such detailed notes that later analysis helped the docs in Washington figure out better treatments, and ultimately the cause, of yellow fever.  Dr. Mudd’s services were so valuable, the soldiers at the fort petitioned President Johnson to pardon him and it was eventually granted.

Take a look at the photos here.  There’s so much to tell you about the fort, especially its construction, that I put most of the details in the captions on the photos.  It’s really a cool place.